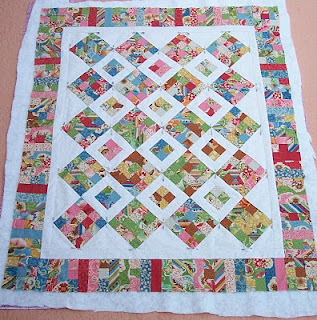 Well I did it...caught up with Charming Girls quilt along.  It's all done and sandwiched together...just needs quilting.
I made a boo boo though, I cut too many of the 4 piece strips...enough for about 10-15 blocks over.  So I had to use them in my border...but I don't think it mattered at all.  Looks good to me!
One thing...I have only just begun using pre cuts.  First was my Maypole layer cake for Kelly's first quilt along and then the charm packs for this one.  I think that, in the future, I will use those in larger blocks...I hate loosing the big floral prints by cutting them so small! 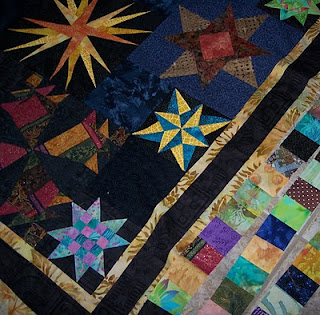 See those 2" square strips in the above photo?  They were supposed to be for my Stars quilt...but I decided to make the quilt alot smaller and now they would be much too wide of a border.  So I took them apart and am going to use these batiks instead of the Eden layer cake I originally planned on doing for CrazyMom's Quilt Along.  I need to cut the background today for this quilt along, then sew the blocks.  Not to worry, though, since I am not making a big quilt, I decided to make a table topper instead...have just enough of the batiks cut to make it.
So....catching up wasn't so hard to do!
More later, thanks for taking the time to visit!
Posted by Anita in Florida at 12:59 PM 9 comments: 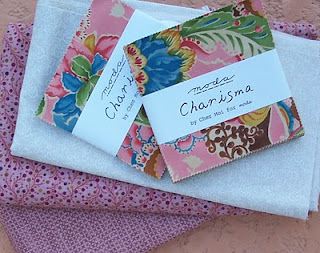 I have some catching up to do with QUILT ALONGS!
Above is my fabric for the CHARMING GIRLS Quilt Along...I chose some CHARISMA charm packs with a light beige background.  Not sure which backing I will use...probably the little cherries. 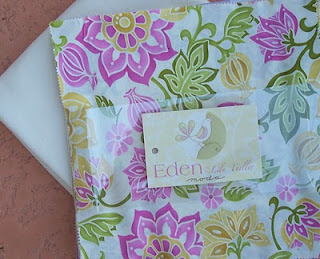 Above are my selections for CRAZY MOM'S Quilt Along.  I decided on an EDEN layer cake...love all the pastel florals...with a cream background.  Haven't chosen a backing yet.
Both of these are at the cutting stage.  It will take me till the end of next week to get to these, but I will catch up eventually.
Thanks for stopping by and I hope you have a great weekend filled with all your favorite things.
Posted by Anita in Florida at 10:17 AM 3 comments: 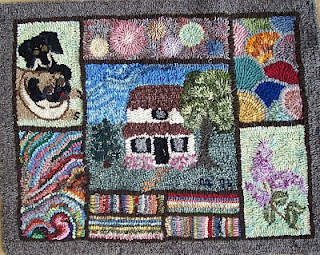 I tried rug hooking a while back...1996 to be exact!!  Measures 28" x 23".
Never finished the sampler...but when I sold my frame a month ago...I knew I HAD to get it done.  Only had the sky to do.  I still have to whip the border (gotta research that cause I forgot how).
I was impressed with rug hooking as it really went pretty fast and I was able to get the dogs actually looking like dogs.  But it is kind of messy with the wool strips...even more messy than quilting, if you can believe it.
It's no great shakes, but I just thought I'd make a quick post of this anyway because I am so happy to have it DONE!
Thanks for stopping by.
you can click to enlarge
click again to get up close and personal
Posted by Anita in Florida at 10:18 AM 2 comments:

Anita in Florida
I live in Southwest Florida with my husband Bob and our little 'hot dog' Margret Mary...the sweetest dog in the world!! Besides our sweet puppy we have 3 grown children. Linda and her husband Tom, their children Mary and Tommy. Bobby and his wife Christine, their children, Chris, Mike and Erica. And last, but never least, our daughter Tina, who lives in upstate New York.

This is a Flickr badge showing public photos and videos from Anita in Florida. Make your own badge here.